My old sites are listed below, in roughly chronological order. Some are unfortunately lost to time, but some are archived.

Song of the Sea & Sky

Sea of Stars (you are here) 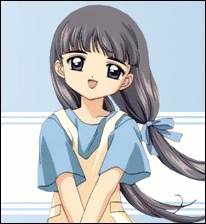 The original Sea of Stars started out in 2004 or 2005, as a wallpaper site called Anime Mirror.
I continued to update it and started making 100x100 icons, as was popular at the time. I renamed it to Anime Manga Mirror when they were first added.
I was still using Paint at this time. I remember downloading this really pretty premade layout featuring Tomoyo from Cardcaptor Sakura, and using it for a total revamp of the site. Unfortunately I can't remember who it was made by; all I remember was that it was a deep blue and featured the picture to the left.

I remember being stuck between the names Sky of Stars and Sea of Wishes, and ended up combining them into Sea of Stars.
I started running another graphics site, Shining Heart, on Freewebs, but I liked Sea of Stars so much I still updated it on Piczo. I was originally planning on moving Sea of Stars to Freewebs, but I never got around to doing it. Just as I was ready, Freewebs transitioned to Webs, purging old accounts and taking away the ability to hand-code sites.